Linen is one of the oldest natural vegetative fiber. Even 5000 years BC linen garments were worn in Egypt and linen fabric was sacred and was used during prays and sacrifice, also for the mummification of Egypt pharaohs. The Lithuanian people were growing linen many years ago. The national Lithuanian songs and tales are mentioning about linen: linen growing, snatching and spinning. The linen is named like sainted plant, sward of sun and corn of women.
Linen fabric is the most acceptable and favorable material for human’s organism: everything what is useful for a person the fabric passes in and what is harmful – doesn’t pass. Linen cell perfectly matches with human’s cell and creates the favorable effect for human’s organism.
Products from linen are widely used at home because of their strength and practicality – they don‘t worn so quickly and it is easy to wash them. Fabrics quickly absorb humidity, so they are especially suitable for towels. Products with special coatings, e.g. tablecloths, are very easy handle and are possible to use even for outside furniture. Also linen absorbs sudden temperature fluctuation, so it is very suitable for sauna and bath products. Linen products are not only attractive but also ecological and antiallergic, so the best choice is linen bedding which you will use for very long period. It was scientifically proved that it is easier to sleep in linen bedding and the sleep is much more qualitative.

More or less, but all natural fiber fabrics shrink after washing. We can offer special finishing S4 for whom it is very important. This finishing minimizes fabric shrinkage after washing. Besides, it is recommended to wash fabric before sewing.

Natural linen has characteristic to crease, but do not forget that linen has to crease as this is the unique and exclusive fiber. If you want to reduce creasing we recommend to choose fabric which have other fibers in their composition (cotton, viscose) or to choose fabric with special easy care finishing LPA which minimizes fabric creasing after washing. It is important to know that fabric becomes less creasy and softer after each washing.

Linen is hard to iron.

Such opinion has those who do not know the main linen ironing rule – to iron damp items. One more way is our easy care finishing LPA which minimizes items creasing after washing and it is easier to iron them. But the main helper in this situation is fashion, because now washed and not ironed garments are very fashionable – you wash, dry and wear them. 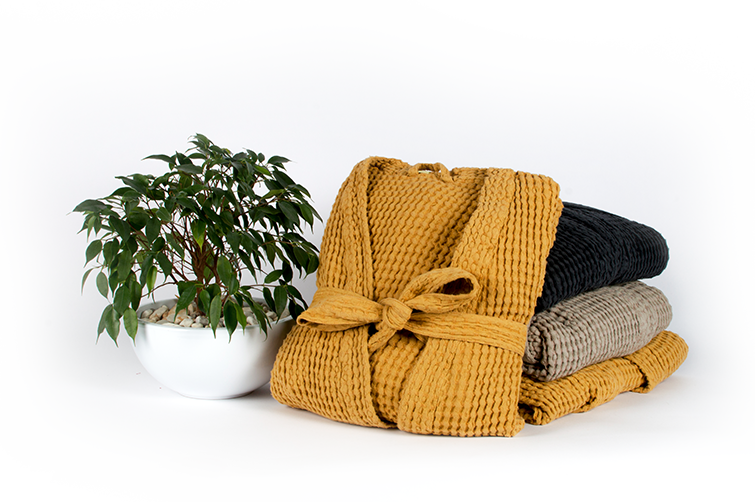